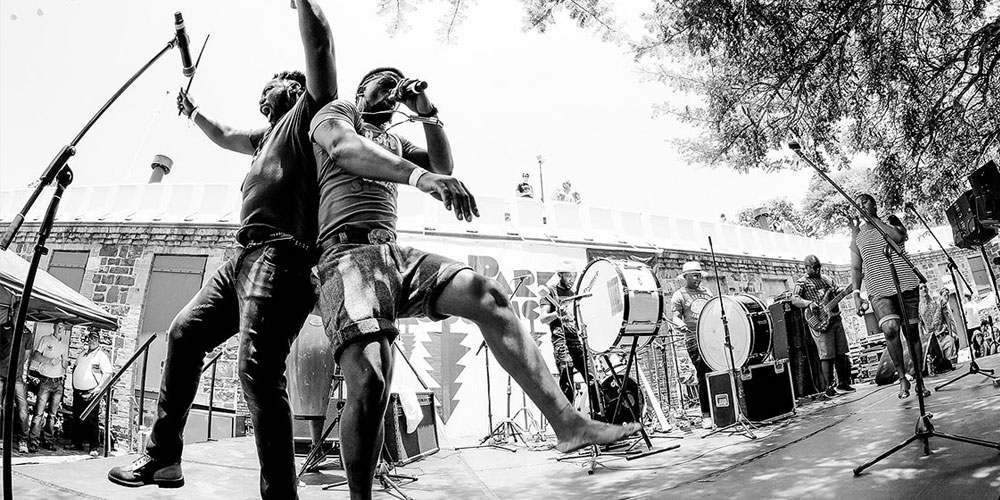 Bantu Continua Uhuru Consciousness (BCUC) played their first Psych Night on the Johannesburg leg of The Black Lips (USA) SA Tour and simply blew everyone away! With accolades from our international guests on the tour and speechless faces in the crowd, we immediately knew we had to get them down to Cape Town!

Cape Town has already shown it’s excitement to have BCUC perform down here next month, and we can barely contain ours! The band has been going for quite a few years now, and has grown to what is a confident and powerful unit. Tell us about the formation of the group? When, where and how?

[In] 2003, Cheex was playing the flute at a community center; he meets Jovi carrying a mini-disc recorder. They spark a cypher under the tree on one of those Jozi blazing sunny days. They take a walk to meet Luja, who works on a train as a Tamsy (ticket examiner). He has his book of rhymes, they spark another cypher there, [and] by then the sun is almost going down. Days later they arrange another cypher in the park, a plus minus twelve-man strong cypher is erected. On that day they get booked to play at a local pub. From the freestyles of the day, the name Bantu Continua Uhuru Consciousness is created and the band is born. As they say – the rest is history.

You’ve worked hard over the past couple of years, played many shows in South Africa and all over the world; but you guys don’t have a recorded album yet. Why is that so? What is your approach to the business of music and do you have a preference for places to play at?

We are a live performing band, which is still learning this recording thing and time dictates where and when we play. We never put our effort in going to the studio because half the time we are preparing for the next show. We approach the music the old school way. That means 90 percent of the time you hear about us through word-of-mouth. We do not have a favourite place to play at; we just play as per invitation. All in all, we are a boutique band. Thus we are still not known.

You have a healthy amount of experience playing in international territories – tell us about your experiences playing abroad, especially from the perspective of a South African with a sound rooted in African soil?

For us, playing overseas is very easy because by virtue of our instruments, our sound, our approach, our professionalism and our past life before the band was created; we can easily adjust to international standards and requirements. When we play abroad; we are this exotic band (with “zumba” lips [smiley face]) that plays from the first drum with enthusiasm, with vigor and non-stop energy. That right there earned us all these stripes (scars included).

The experience was not that different from other experiences. We were in our backyard, playing along side our friends and opening for an international act. We just did our job and made sure that we kept the Jozi flag anchored high, as it is supposed to. Yet not forgetting that the show is not about us, the show was about The Black Lips. We just rolled the carpet out so that our guests would have a good a time.

Describing the sound of BCUC is not a simple task; however, we have seen the term “Afro-Psychedelic-Future-Pop” surround your music, and find it to be quite an apt description! Where does your sound draw inspiration from and what does the term ‘psychedelic’ mean to you?

Afro-Psychedelic to us is a concoction of sounds and rhythms that don’t play at the same time signature. The voices also support the term because they are not saying the same thing and they don’t abide to any time signature. Psychedelia to us is a point after a chant when the music is taking over and we are putting brakes to the speed that we have just created. Of course, it has to be Africa Ngungungu (the tone that is made by the African languages we use when they meet the drums). Our music derives from a mix of genres across the ages. But our inspiration is from indigenous music that is not exposed in the mainstream. We sing old South African jazz-inspired songs, ritual songs, around the fire hood songs, shebeen music, church songs and we infuse them with the raps and a Rock n’ Roll attitude.

In a similar vein, what music did you guys listen to when growing up?

What do you most look forward to in your upcoming trip to Cape Town? Do you have anything special planned for the people of the Cape?