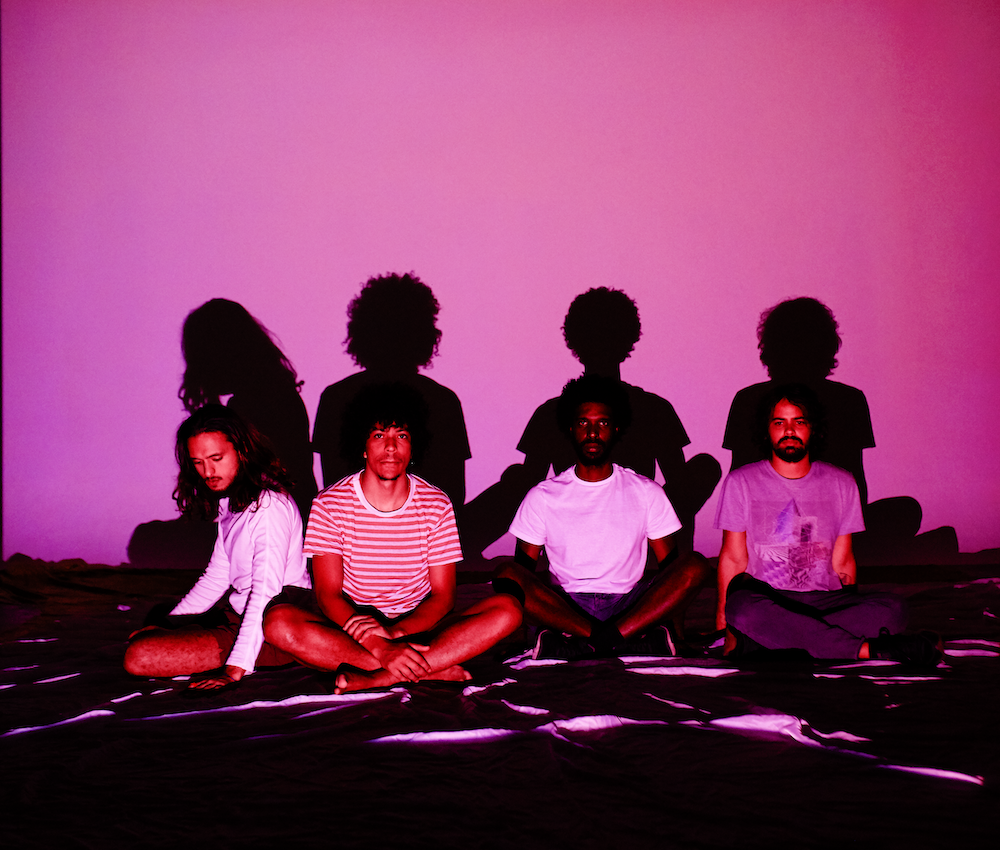 Born in the city of Goiânia, Brazil, to impassioned and inspired teenagers yearning to sustain a lifelong adventure within the music realm, psych-rock crusaders Boogarins have undeniably succeeded in carving out a rich history amidst hallucinatory twists-and-turns for any unpredictable future that lies ahead. Reaching audiences far and wide, Boogarins’ unique blend of psychedelia-infused pop, blistering alternative-rock and experimental mind-melting fields of texture have given rise to an array of genre-defying releases, with Sombrou Dúvida being their latest LP released in May 2019. Celebrated for vast instrumentation and provocative lyrical content, Boogarins have by no means slowed down in progressing their already enriched musical-makeup and continue to do so by now gracing the shores of Endless Daze 2019 festival during their very first ever trip to South Africa.

For anyone who may have just stumbled into the hazy, abundantly emotive realm of Boogarins, how would you describe the music you create together?

Layering of the simple and melodic within the chaotic and random.

Drifting between an array of alternative centered genres, Boogarins fit quite perfectly within the psychedelic-rock category. How much influence does psychedelic-rock have on your music, and how do you feel the genre has evolved or progressed since its inception in the 60s-70s?

I guess it’s a lot about how it’s influenced the next generation. We were probably more influenced in the experimental or avant-garde recording approach taken on by psych bands than its actual musical history. We all started playing and developing our musicality more inspired and interested in the classics like Nirvana, The Kinks, The Velvet Underground, etc, and all of those names have some portion of psychedelia, but there is a lot of depth in their songwriting and instrumentation, even when it’s “sloppy” or “experimental”. That and brazilian music from all different places in time – that adds a lot of the upbeat tempo and beautiful harmonization, so it’s a bit weird to think about psychedelia as something that evolved for real. I guess as abstraction and experimentalism evolves naturally, the main point is to develop your own language, and suddenly whoever succeeds with being so-called psychedelic, goes out of the “psych” box, which is only really out there to define bands that play blues-influenced songs with tons of reverb, distortion or filters.

Boogarins released their fourth studio album Sombrou Dúvida this year via Lab 344 to critical acclaim rightfully so for its gleaming innovative songwriting and concise production, but how do you feel this conception may have differed to that of 2017’s Lá Vem a Morte?

Basically, it was better recorded. We went to a proper studio to finish what was supposed to be Lá Vem a Morte, but then suddenly we had a whole other album and that’s why it initially came out as a “long EP”, and later a full LP (with the exception of the 3 bonus tracks we presented in the Deluxe Version). Songs like “Invenção” and “Te Quero Longe” were part of this initial version of our 3rd album, but once we heard the recording sessions we did by ourselves in a house in Austin together with other sessions engineered by Tim Gerron – we heard two different albums, and fortunately we had the vision to see those first recordings coming together as a proper album. So I guess what differs also makes them part of the same development (they’re like Siamese brothers – not twins, haha).

Boogarins are scheduled to perform at Endless Daze festival in November 2019. Together as a band, are there any particular aspects of this experience that you are most looking forward to collectively speaking?

After touring for 5 years through Europe and the Americas, visiting a new continent for the first time is really exciting. We wish we could tour Africa properly, but it’s still a real privilege to have such a nice festival take care of us, bring us down to have a good time as well as deliver a good time for you all.

Could you explain the contrast between performing in your own hometown of Goiânia in Brazil, to performing somewhere overseas, and what kind of response you may notice from specific audiences depending on location?

Language is the first and major difference. People usually sing the songs, and we’re more close to a “pop-rock band” than we feel like rockstars and all that shit, haha – but the songs people may sing more avidly are not necessarily the ones we are feeling at the moment (like everything in life), so there are both good and bad sides. When we’re not really worried about playing the “hits” per se, we might go for tracks that we feel more comfortable and excited about so that may give the audience a more powerful experience, musically speaking. But even visually, when you see Ynaiã smashing the drums, it’s already worth the ticket!

If there was ever a possible scenario where Boogarins had the opportunity to pick any artist on the planet to musically collaborate with – who would you choose, and why?

That’s even too much for me to imagine, haha. There are so many artists who we admire, but we’re not the kind to idealize stuff. So for the most part, anyone who collaborates with us would probably have a good time and make a good song out of it too.

If you could aptly predict the future – what does 2020 hold for Boogarins? Are there any plans to release new music, tour or collaborate in any way that you would like to share?

More good and honest music. We’re trying to release music more often now, so that could even mean a new record coming out next year, but we’re not too concerned with that at the moment. Our latest LP, Sombrou Duvida still has places to go and more people to connect with, so we do intend to tour it for a few more months.