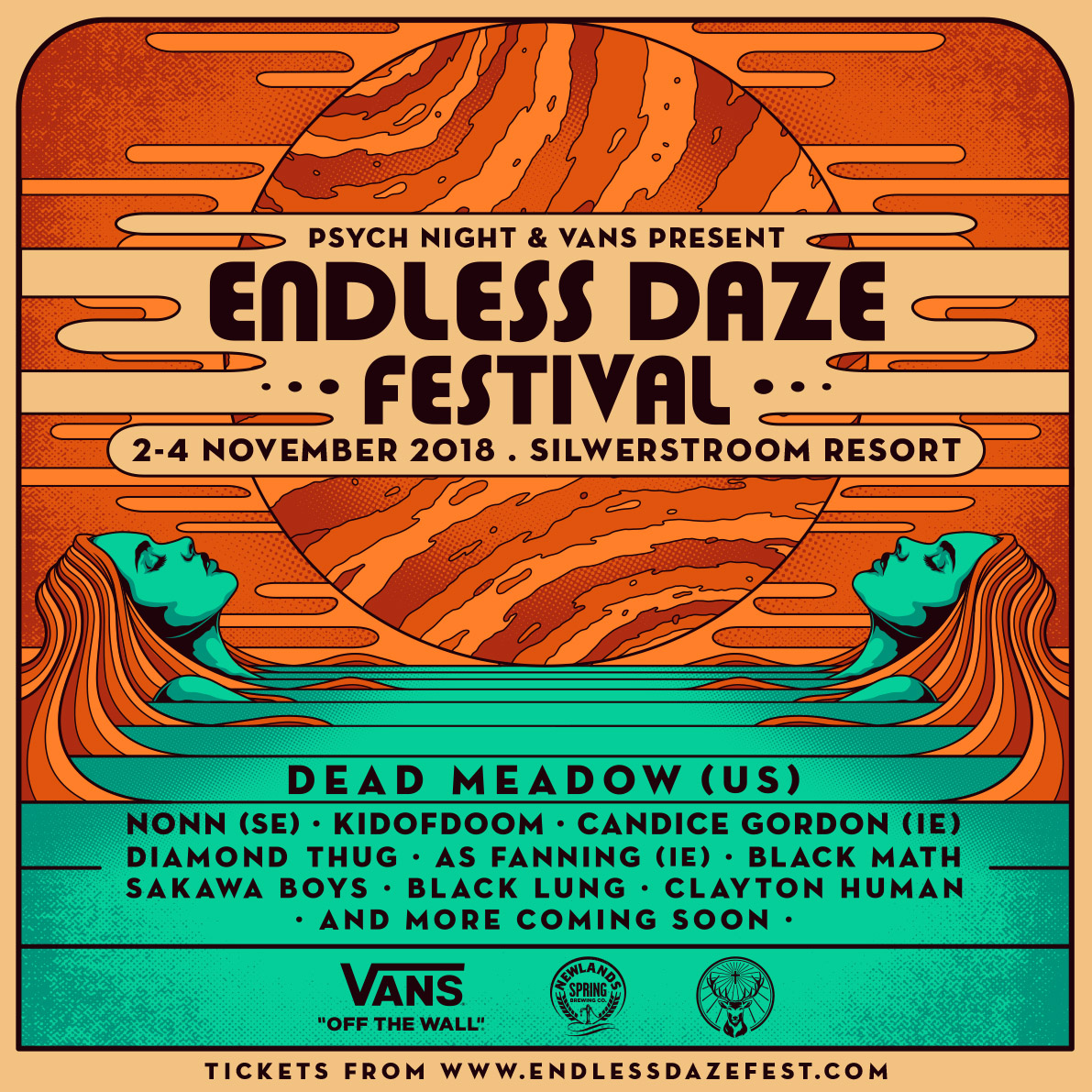 We’ve been anxiously waiting to share the first bunch of acts confirmed for Endless Daze 2018 with all of you, and now that the countdown to the festival has officially begun, we thought we’d get you all even more stoked.

We’re beyond excited to have Dead Meadow headline this year’s festival.

Having been on the scene for two decades, Dead Meadow has captivated their audience with their hypnotic sounds for years – and years to come.

The Washington, D.C based band will make their first appearance on African soil this November.

Having released eight albums over the past 20 years, the band released their latest album, ‘The Nothing They Need’ in March of this year. Described as a ‘thicker and fuller’ sound by the band themselves, the 3-piece also wrote recorded and mixed everything in-house.

Having released her debut album, ‘Garden of Beasts’ in 2017, Candice Gordon has been touring her album in Europe, whilst also setting up a record label called Proper Octopus – which helped produce the likes of fellow Endless Daze first-timer, A.S Fanning.

Attributing some of her inspiration to Patti Smith and Nick Cave, naturally, we can’t wait to welcome Candice to the Endless Daze stage.

Describing his sound as drawing inspiration from Irish literary tradition, beautifully synced with 60s psych and goth-rock, A.S Fanning will join his friend and fellow Dubliner Candice Gordon at Endless Daze this year.

Reuniting for the first time in years, we are beyond excited to have the incredible kidofdoom on stage again this November. Widely regarded as one of the best local instrumental bands, kidofdoom has cultivated a sound that is both undeniably original and enticing.

Culminating in a 80s electronica, post-punk dream is Swedish project, NONN. With a sound that’ll wrap you in a hazy wave, one of Fuzz Club Records latest signings released their debut album in May.

Already having a standout performance at the inaugural Endless Daze in 2016, Durban-based trio, Black Math, return to Silwerstroom this year for what’s sure to be another brazen and unabashed performance.

Cape Town-based Sakawa Boys has become a favourite for many local music fans, with their songs inevitably making an appearance on many roadtrip compilations and late night listening sessions. Their album, ‘2014 Anxiety’ was hailed by many as the best of that year and we’re really stoked to have them on the Endless Daze stage this year.

If you’ve ever been to a Black Lung show then you’d know that you’re in for a high energy, hip-shaking performance at this year’s festival. As one of the hardest working bands in the city and long time collaborators with Psych Night we can not wait for their Endless Daze Festival debut.

The dreamy sounds of Clayton Human is the perfect soundtrack to the whimsy of the West Coast. Having released his single, ‘Witches’ in March”, Clayton Human is a natural fit to in this years lineup.